This code uses Midepoint Method to Solve Multi Ordinary Differential Equations (ODE). The code has been built in way you can edit it easily. The output chart presents the numerical solution for all the given differential equations.

In numerical analysis, a branch of applied mathematics, the midpoint method is a one-step method for numerically solving the differential equation,

The explicit midpoint method is given by the formula

the implicit midpoint method by

for n = 0,1,2,…  Here, h is the step size — a small positive number, tn = t0 + n.h and yn is the computed approximate value of y(tn) The explicit midpoint method is also known as the modified Euler method, the implicit method is the most simple collocation method, and, applied to Hamiltonian dynamics, a symplectic integrator.

A geometric interpretation may give a better intuitive understanding of the method. In the basic Euler’s method, the tangent of the curve at (tn, yn) is computed using f(tn, yn). The next value yn+1 is found where the tangent intersects the vertical line t = tn+1. However, if the second derivative is only positive between tn and tn+1, or only negative (as in the diagram), the curve will increasingly veer away from the tangent, leading to larger errors as h increases. The diagram illustrates that the tangent at the midpoint (upper, green line segment) would most likely give a more accurate approximation of the curve in that interval. This tangent is estimated by using the original Euler’s method to estimate the value of y(t) at the midpoint, then computing the slope of the tangent with f(). Finally, the improved tangent is used to calculate the value of yn+1 from yn. This last step is represented by the red chord in the diagram. Note that the red chord is not exactly parallel to the green segment (the true tangent), due to the error in estimating the value of y(t) at the midpoint.

The methods are examples of a class of higher-order methods known as Runge–Kutta methods.

Derivation of the Midpoint Method: 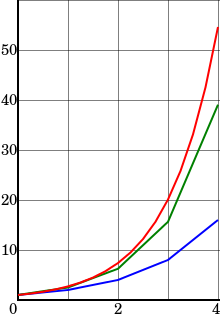 The same illustration for h = 0.25 It is seen that the midpoint method converges faster than the Euler method.

The midpoint method is a refinement of the Euler’s method

and is derived in a similar manner. The key to deriving Euler’s method is the approximate equality

which is obtained from the slope formula 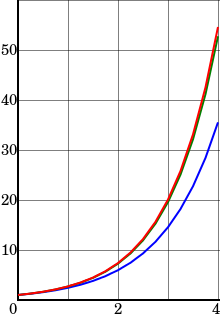 and keeping in mind that y’ = f(t,y) For the midpoint methods, one replaces (3) with the more accurate

when instead of (2) we find

One cannot use this equation to find y(t+h) as one does not know y at t + h/2. The solution is then to use a Taylor series expansion exactly as if using the Euler method to solve for y(t+h/2):

and the explicit midpoint method (1e).

Inserting the approximation yn + h.k for y(tn+h)  results in the implicit Runge-Kutta method

which contains the implicit Euler method with step size h/2 as its first part.