This code solves a single ordinary differential equation (ODE) using Standard form of  fourth order Runge Kutta (RK4). A comparison between the solutions (Exact and Numerical) on one chart will be produced, with a second chart presenting the errors of these forms.

Runge–Kutta methods are a family of implicit and explicit iterative methods, which include the well-known routine called the Euler Method, used in temporal discretization for the approximate solutions of ordinary differential equations. These methods were developed around 1900 by the German mathematicians Carl Runge and Wilhelm Kutta. 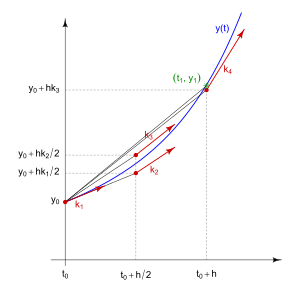 Let an initial value problem be specified as follows:

Here y is an unknown function (scalar or vector) of time t, which we would like to approximate; we are told that y’, the rate at which y changes, is a function of t and of y itself. At the initial time t0 the corresponding y value is y0. The function f and the data t0, y0 are given.

(Note: the above equations have different but equivalent definitions in different texts).

Here yn+1 is the RK4 approximation of y(tn+1), and the next value yn+1 is determined by the present value (yn) plus the weighted average of four increments, where each increment is the product of the size of the interval, h, and an estimated slope specified by function f on the right-hand side of the differential equation.

In averaging the four increments, greater weight is given to the increments at the midpoint. If f is independent of y, so that the differential equation is equivalent to a simple integral, then RK4 is Simpson’s rule.

In many practical applications the function f  is independent of t (so called autonomous system, or time-invariant system, especially in physics), and their increments are not computed at all and not passed to function f , with only the final formula for tn+1 used.

Covert Speech to Text in MATLAB