Home > Downloads > Solving for the Exit Flow of a Supersonic Nozzle

Solving for the Exit Flow of a Supersonic Nozzle

by admin in Aerospace , Control Systems & Aerospace on April 3, 2019
Share

This code shows how to use the method of characteristics and Prandtl-Meyer flow theory to solve a problem in supersonic flow involving expansions. Solve for the flow field downstream of the exit of a supersonic nozzle. All the down described equations and steps are exists in the Matlab files, that you will download after the checkout.

This section describes the problem to be solved. It also provides necessary equations and known values.

Model the expansion fan as three characteristics. Due to symmetry, arbitrarily choose to work only on the top half of the flow. Following is a figure of the nozzle exit. 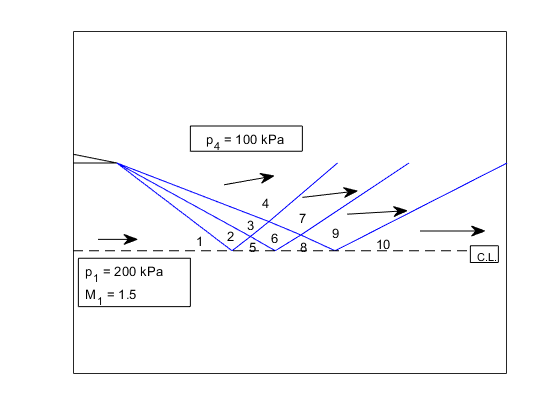 The given information in the problem is:

The fluid is assumed to be air that behaves like a perfect gas with the following constant specific heat ratio.

In the previous figure, the blue lines in the are approximate characteristics. Characteristics of type I make a negative acute angle with the flow direction. Characteristics of type II make a positive acute angle with the flow direction. A detailed derivation of the method is outside the scope of this example analysis. This example analysis uses the region-to-region procedure. It is assumed that you are familiar with this procedure.

In Prandtl-Meyer flow and the method of characteristics, calculate the important angles for all regions of the flow.

Computing the Flow Properties Through the First Expansion Fan

Because we are approximating the flow with three characteristics, the calculate the change in flow angle in crossing type I characteristics from region 1 to region 4:

Note that flow in region 1 is parallel to the horizontal and therefore:

The flow angle in region 5 is known to be zero from the centerline boundary condition. Therefore, the change in angle from region 2 to region 5 is

Calculate the change in Prandtl-Meyer angle across type II characteristics:

A type II characteristic is crossed in going from region 3 to region 6. Therefore,

Add equations (1) and (2) together, then solve for the Prandtl-Meyer angle in region 6. This yields the following expression.

From equation (1), the flow angle in region 6 is

For region 7 a type one characteristic is crossed and all information is available in region 6. Region 8 is on the centerline; its flow angle is zero. Going from region 6 to region 8 requires crossing a type II characteristic. Therefore, calculate the Prandtl-Meyer angle in region 8 as:

For upcoming calculations, combine the flow angles into one vector and the Prandtl-Meyer angles into another vector.

To calculate the Mach numbers and Mach angles in each region, using the flowprandtlmeyer function with the prandtlMeyerAngles as the input. You can use the results from this function to find the angle that the type I and type II characteristics make with the horizontal inside each region. You can then use these angles to calculate slopes in the x-y plane, where the centerline is the x-axis and the exit plane of the nozzle is the y-axis. For type I characteristics and type II characteristics, respectively, the slopes are:

Note, the values in the following table for type I and type II are the angles with the horizontal, not the slopes.

Solving for the Flow Geometry

The flow properties are known in all regions, but in order to solve for the flow field you must calculate the actual geometry of each region. The last two columns of the above table contain the angles that each type of characteristic makes with the horizontal. Because straight lines approximate the characteristics of the flow in each region, the boundary between any two regions is approximated by the average of the angles that each makes in the bordering regions. Because the waves bend through the expansion fan, begin the analysis from the point from which the characteristics originate. The characteristics originate at the lip of the nozzle and work downstream.

This wave that ‘reflects’ from the centerline is actually the steepest sloping type II characteristic that propagates from the bottom lip. However, the analysis considers the centerline to be a boundary due to symmetry. This produces the same results that you would get if you worked both halves of the nozzle.

With the following information known:

The second steepest type I characteristic is the from the nozzle lip, separates region 2 and region 3. The average angle with the horizontal and the associated slope of the wave are given by:

Use the slope-intercept formula and the procedure above to calculate all points. To calculate the third point in the flow, first calculate the intersection of the region 3-4 boundary and the 3-6 boundary. The angles of the boundary lines are calculated using the average of the angles with the horizontal. You can then use trigonometry to find the slope, which is now computed in one step.

The first type II characteristic now propagates beyond the fan and does not interfere with any other characteristics. The angle that defines the direction in which the steepest type II propagates is an angle which is the average of type II waves in regions 4 and 7.

Solve also the second steepest type I characteristic to continue downstream. Start from the known location of point 2 to calculate the x-intercept of the second type I characteristic. Again, the solution uses the point-slope form of the line. However, there is no interference until the centerline boundary is reached. We only need to consider one line to find the x-location of ‘point 4’. The slope of the boundary between region 5 and region 6 is a type I wave:

The rearranged point-slope form (knowing y = 0 at the centerline) is used to find point 4.

The second type II characteristic propagates beyond the fan at an angle averaged between the region 7 and region 9 angles for type II waves.

The last point of interest is the x-intercept of the flattest type I wave. Calculate this point by knowing the location of point 5 and finding the slope of the type I wave between region 8 and region 9.

The final type II wave propagates away at an angle averaged between region 9 and region 10.

With all the points calculated and the slope of the freely propagating lines known, connect the dots: 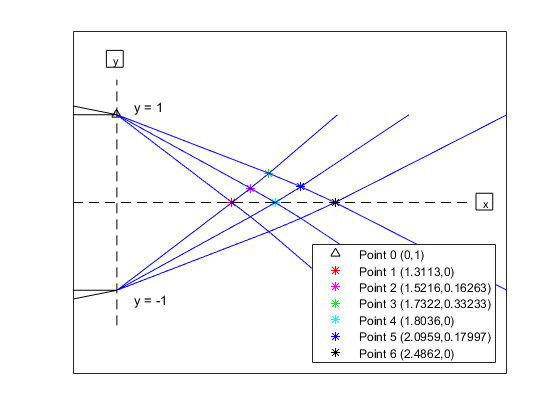