MATLAB Code For Tracking Pedestrians from a Moving Car

This code shows how to track pedestrians using a camera mounted in a moving car.

This code shows how to perform automatic detection and tracking of people in a video from a moving camera. It demonstrates the flexibility of a tracking system adapted to a moving camera, which is ideal for automotive safety applications. Unlike the stationary camera example, The Motion-Based Multiple Object Tracking, this code contains several additional algorithmic steps. These steps include people detection, customized non-maximum suppression, and heuristics to identify and eliminate false alarm tracks. 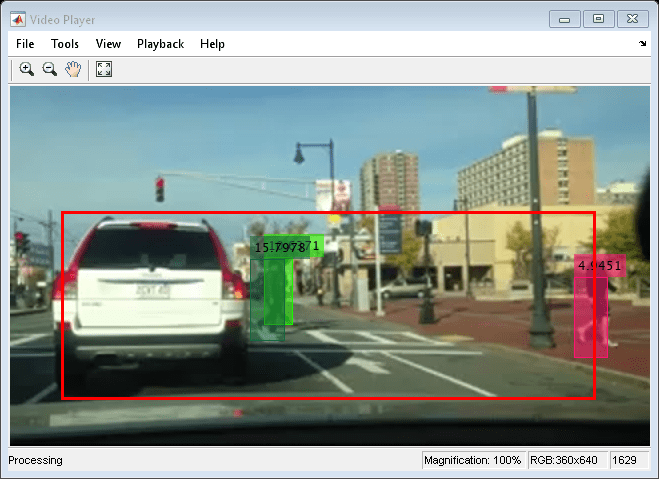 Auxiliary Input and Global Parameters of the Tracking System:

This tracking system requires a data file that contains information that relates the pixel location in the image to the size of the bounding box marking the pedestrian’s location. This prior knowledge is stored in a vector pedScaleTable. The n-th entry in pedScaleTable represents the estimated height of an adult person in pixels. The index n references the approximate Y-coordinate of the pedestrian’s feet.

To obtain such a vector, a collection of training images were taken from the same viewpoint and in a similar scene to the testing environment. The training images contained images of pedestrians at varying distances from the camera. Using the Image Labeler app, bounding boxes of the pedestrians in the images were manually annotated. The height of the bounding boxes together with the location of the pedestrians in the image were used to generate the scale data file through regression. Here is a helper function to show the algorithmic steps to fit the linear regression model: helperTableOfScales.m

The setupSystemObjects function creates system objects used for reading and displaying the video frames and loads the scale data file.

The pedScaleTable vector, which is stored in the scale data file, encodes our prior knowledge of the target and the scene. Once you have the regressor trained from your samples, you can compute the expected height at every possible Y-position in the image. These values are stored in the vector. The n-th entry in pedScaleTable represents our estimated height of an adult person in pixels. The index n references the approximate Y-coordinate of the pedestrian’s feet.

The initializeTracks function creates an array of tracks, where each track is a structure representing a moving object in the video. The purpose of the structure is to maintain the state of a tracked object. The state consists of information used for detection-to-track assignment, track termination, and display.

The structure contains the following fields:

The detectPeople function returns the centroids, the bounding boxes, and the classification scores of the detected people. It performs filtering and non-maximum suppression on the raw output of the detector returned by peopleDetectorACF.

Use the Kalman filter to predict the centroid of each track in the current frame, and update its bounding box accordingly. We take the width and height of the bounding box in previous frame as our current prediction of the size.

Assigning object detections in the current frame to existing tracks is done by minimizing cost. The cost is computed using the bboxOverlapRatio function, and is the overlap ratio between the predicted bounding box and the detected bounding box. In this example, we assume the person will move gradually in consecutive frames due to the high frame rate of the video and the low motion speed of a person.

Step 1: Compute the cost of assigning every detection to each track using the bboxOverlapRatio measure. As people move towards or away from the camera, their motion will not be accurately described by the centroid point alone. The cost takes into account the distance on the image plane as well as the scale of the bounding boxes. This prevents assigning detections far away from the camera to tracks closer to the camera, even if their centroids coincide. The choice of this cost function will ease the computation without resorting to a more sophisticated dynamic model. The results are stored in an MxN matrix, where M is the number of tracks, and N is the number of detections.

The value for the cost of not assigning a detection to a track depends on the range of values returned by the cost function. This value must be tuned experimentally. Setting it too low increases the likelihood of creating a new track, and may result in track fragmentation. Setting it too high may result in a single track corresponding to a series of separate moving objects.

The updateAssignedTracks function updates each assigned track with the corresponding detection. It calls the correct method of vision.KalmanFilter to correct the location estimate. Next, it stores the new bounding box by taking the average of the size of recent (up to) 4 boxes, and increases the age of the track and the total visible count by 1. Finally, the function adjusts our confidence score for the track based on the previous detection scores.

The updateUnassignedTracks function marks each unassigned track as invisible, increases its age by 1, and appends the predicted bounding box to the track. The confidence is set to zero since we are not sure why it was not assigned to a track.

Noisy detections tend to result in creation of false tracks. For this example, we remove a track under following conditions:

The displayTrackingResults function draws a colored bounding box for each track on the video frame. The level of transparency of the box together with the displayed score indicate the confidence of the detections and tracks.

Noise Analysis and Measurement of Noise Statistics with Matlab

Covert Speech to Text in MATLAB