This code conduct an Interpolation for a given set of points using Linear Interpolation method that uses linear polynomials, to construct new data points within the range of a discrete set of known data points.

linear interpolation is a method of curve fitting using linear polynomials to construct new data points within the range of a discrete set of known data points. 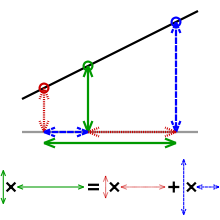 If the two known points are given by the coordinates (x0, y0) and (x1, y1), the linear interpolant is the straight line between these points. For a value x in the interval (x0, x0), the value y along the straight line is given from the equation of slopes

which can be derived geometrically from the figure on the right. It is a special case of polynomial interpolation with n = 1.

Solving this equation for y, which is the unknown value at x, gives

which is the formula for linear interpolation in the interval (x0, x0). Outside this interval, the formula is identical to linear extrapolation.

This formula can also be understood as a weighted average. The weights are inversely related to the distance from the end points to the unknown point; the closer point has more influence than the farther point. Thus, the weights are (x – x0) / (x1 – x0) and (x1 – x) / (x1 – x0), which are normalized distances between the unknown point and each of the end points. Because these sum to 1,

which yields the formula for linear interpolation given above.

Interpolation of a Data Set: 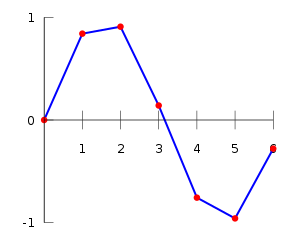 Linear interpolation is often used to approximate a value of some function f using two known values of that function at other points. The error of this approximation is defined as

where p denotes the linear interpolation polynomial defined above:

It can be proven using Rolle’s theorem that if f has a continuous second derivative, then the error is bounded by