This code gives you the histogram of a colored image without using the built-in functions of MATLAB. After calculating the histogram the code also performs image equalization and presents both results.

In image processing and photography, a color histogram is a representation of the distribution of colors in an image. For digital images, a color histogram represents the number of pixels that have colors in each of a fixed list of color ranges, that span the image’s color space, the set of all possible colors.

The color histogram can be built for any kind of color space, although the term is more often used for three-dimensional spaces like RGB or HSV. For monochromatic images, the term intensity histogram may be used instead. For multi-spectral images, where each pixel is represented by an arbitrary number of measurements (for example, beyond the three measurements in RGB), the color histogram is N-dimensional, with N being the number of measurements taken. Each measurement has its own wavelength range of the light spectrum, some of which may be outside the visible spectrum.

If the set of possible color values is sufficiently small, each of those colors may be placed on a range by itself; then the histogram is merely the count of pixels that have each possible color. Most often, space is divided into an appropriate number of ranges, often arranged as a regular grid, each containing many similar color values. The color histogram may also be represented and displayed as a smooth function defined over the color space that approximates the pixel counts.

Like other kinds of histograms, the color histogram is a statistic that can be viewed as an approximation of an underlying continuous distribution of color values.

Color histograms are flexible constructs that can be built from images in various color spaces, whether RGB, rg chromaticity or any other color space of any dimension. A histogram of an image is produced first by discretization of the colors in the image into a number of bins, and counting the number of image pixels in each bin. For example, a Red–Blue chromaticity histogram can be formed by first normalizing color pixel values by dividing RGB values by R+G+B, then quantizing the normalized R and B coordinates into N bins each. A two-dimensional histogram of Red-Blue chromaticity divided into four bins (N=4) might yield a histogram that looks like this table:

A histogram can be N-dimensional. Although harder to display, a three-dimensional color histogram for the above example could be thought of as four separate Red-Blue histograms, where each of the four histograms contains the Red-Blue values for a bin of green (0-63, 64-127, 128-191, and 192-255).

The histogram provides a compact summarization of the distribution of data in an image. The color histogram of an image is relatively invariant with translation and rotation about the viewing axis, and varies only slowly with the angle of view.[1] By comparing histograms signatures of two images and matching the color content of one image with the other, the color histogram is particularly well suited for the problem of recognizing an object of unknown position and rotation within a scene. Importantly, translation of an RGB image into the illumination invariant rg-chromaticity space allows the histogram to operate well in varying light levels.

2. What is a color histogram?

Characteristics of a Colored Image Histogram

A color histogram focuses only on the proportion of the number of different types of colors, regardless of the spatial location of the colors. The values of a color histogram are from statistics. They show the statistical distribution of colors and the essential tone of an image.

In general, as the color distributions of the foreground and background in an image are different, there might be a bimodal distribution in the histogram.

Principles of the Formation of a Color Histogram

The formation of a color histogram is rather simple. From the definition above, we can simply count the number of pixels for each 256 scales in each of the 3 RGB channel, and plot them on 3 individual bar graphs.

Given the following image of a cat (an original version and a version that has been reduced to 256 colors for easy histogram purposes), the following data represents a color histogram in the RGB color space, using four bins. 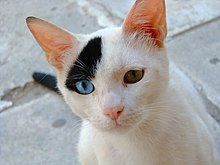 A picture of a cat

, then the cumulative histogram operator H can be defined by:

Mu is the Lebesgue measure of sets. H(f) in turn is a real function. The (non-cumulative) histogram is defined as its derivative.

A New sqrtm for Matlab