This code calculates the Numerical Integration of a given equation on a predefined interval using Gauss Quadrature Method. This codes uses variable step size and gives accurate and fast results.

About The Method (Gaussian quadrature): 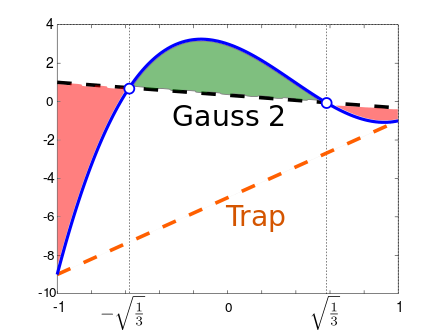 The Gauss-Legendre quadrature rule is not typically used for integrable functions with endpoint singularities. Instead, if the integrand can be written as

where g(x) is well-approximated by a low-degree polynomial, then alternative nodes x’i and weights w’i will usually give more accurate quadrature rules. These are known as Gauss-Jacobi quadrature rules, i.e.,

It can be shown (see Press, et al., or Stoer and Bulirsch) that the quadrature nodes xi are the roots of a polynomial belonging to a class of orthogonal polynomials (the class orthogonal with respect to a weighted inner-product). This is a key observation for computing Gauss quadrature nodes and weights.

Let pn be a nontrivial polynomial of degree n such that

If we pick the n nodes xi to be the zeros of pn, then there exist n weights wi which make the Gauss-quadrature computed integral exact for all polynomials h(x) of degree 2n − 1 or less. Furthermore, all these nodes xi will lie in the open interval (a, b) (Stoer & Bulirsch 2002, pp. 172–175).

The polynomial pn is said to be an orthogonal polynomial of degree n associated to the weight function ω(x). It is unique up to a constant normalization factor. The idea underlying the proof is that, because of its sufficiently low degree, h(x) can be divided by Pn(x) to produce a quotient q(x) of degree strictly lower than n, and a remainder r(x)of still lower degree, so that both will be orthogonal to Pn(x), by the defining property of Pn(x). Thus

Because of the choice of nodes xi, the corresponding relation

holds also. The exactness of the computed integral for h(x) then follows from corresponding exactness for polynomials of degree only n or less (as is r(x)).

General formula for the weights:

The weights can be expressed as

where ak is the coefficient of x^k in Pk(x). To prove this, note that using Lagrange interpolation one can express r(x) in terms of r(xi) as

because r(x) has degree less than n and is thus fixed by the values it attains at n different points. Multiplying both sides by ω(x) and integrating from a to b yields

The weights ωi are thus given by

This integral expression for ωi can be expressed in terms of the orthogonal polynomials Pn(x) and Pn-1(x) as follows.

where an is the coefficient of x^n in Pn(x). Taking the limit of x to xi yields using L’Hôpital’s rule

We can thus write the integral expression for the weights as:

In the integrand, writing

We can evaluate the integral on the right hand side for

We can then write

The term in the brackets is a polynomial of degree n-2, which is therefore orthogonal to Pn-1(x). The integral can thus be written as

Proof that the weights are positive:

where, as above, the xj are the roots of the polynomial Pn(x). Clearly f(xj) = deltaij. Since the degree of f(x) is less than 2n-1, the Gaussian quadrature formula involving the weights and nodes obtained from Pn(x) applies. Since f(xi) = 0 for j not equal to i, we have

Since both w(x) and f(x) are non-negative functions, it follows that wi > 0.

First of all, the polynomials defined by the recurrence relation starting with P0(x) = 1 have leading coefficient one and correct degree. Given the starting point by P0, the orthogonality of Pr can be shown by induction. For r = s = 0 one has

all scalar products vanish except for the first one and the one where Ps meets the same orthogonal polynomial. Therefore,

However, if the scalar product satisfies (xf,g) = (f,xg)  (which is the case for Gaussian quadrature), the recurrence relation reduces to a three-term recurrence relation: For s < r-1, xps is a polynomial of degree less than or equal to r − 1. On the other hand,

(the last because of

since xPr-1 differs from Pr by a degree less than r).

The three-term recurrence relation can be written in matrix form

The zeros xj of the polynomials up to degree n, which are used as nodes for the Gaussian quadrature can be found by computing the eigenvalues of this tridiagonal matrix. This procedure is known as Golub–Welsch algorithm.

For computing the weights and nodes, it is preferable to consider the symmetric tridiagonal matrix big J with elements

is the integral of the weight function

The error of a Gaussian quadrature rule can be stated as follows (Stoer & Bulirsch 2002, Thm 3.6.24). For an integrand which has 2n continuous derivatives,

for some ξ in (a, b), where pn is the monic (i.e. the leading coefficient is 1) orthogonal polynomial of degree n and where

Stoer and Bulirsch remark that this error estimate is inconvenient in practice, since it may be difficult to estimate the order 2n derivative, and furthermore the actual error may be much less than a bound established by the derivative. Another approach is to use two Gaussian quadrature rules of different orders, and to estimate the error as the difference between the two results. For this purpose, Gauss–Kronrod quadrature rules can be useful.

Comparison of Three Secant Methods For Finding Roots of Equation