This code shows how to load flight data and estimate G forces during the flight. All the down described equations and steps are exists in the Matlab files, that you will download after the checkout.

The atmospheric properties, temperature (T), speed of sound (a), pressure (P), and density (rho), are determined at altitude for standard day using the atmoscoesa function.

Once the calibrated airspeed (CAS) and the atmospheric properties are determined, the true airspeed (Vt) can be calculated using the correctairspeed function.

Use the datcomimport function to bring the Digital DATCOM data into MATLAB. The units for this aerodynamic information are feet and degrees.

The stability and dynamic derivatives in the digital DATCOM structure are 3-D tables which are functions of Mach number, angle of attack in degrees, and altitude in feet. In order to perform 3-D linear interpolation (interp3), the indices for the derivative tables are required to be monotonic and plaid. Indices of this form are generated by the meshgrid function.

Since the angular units of the derivatives are in degrees, the units of angle of attack (alpha) are converted from radians from degrees by the function convang.

The Mach numbers for the flight are calculated by the function machnumber using speed of sound (a) and airspeed (Vt).

Once the derivatives are found for the flight conditions, aerodynamic coefficients can be calculated.

Reference lengths and areas used in the aerodynamic coefficient computation are extracted from the digital DATCOM structure.

The angular units of the derivatives are in degrees, so the units of sideslip angle (beta) are converted from radians from degrees by the function convang.

In order to calculate the aerodynamic coefficients, the body angular rates (omega) need to be given in the stability axes, like the derivatives. The function dcmbody2wind generates the direction cosine matrix for body axes to stability axes (Tsb) when the sideslip angle (beta) is set to zero.

The last value of alpha_dot is held to keep the length of alpha_dot consistent with other arrays in this calculation. This is needed because the difffunction returns an array that is one value shorter that the input

Compute the drag coefficient (CD), the side force coefficient (CY) and the lift coefficient (CL). The convvel function is used to get the units of airspeed (Vt) consistent with those of the derivatives.

Aerodynamic coefficients for drag, side force and lift are used to compute aerodynamic forces.

Looping through the flight data points, aerodynamic forces are computed and converted from stability to body axes. The convpres function is used to get the units of dynamic pressure (qbar) consistent with those of the reference area (Sref).

A constant thrust is estimated in the body axes.

The constant thrust estimate is added to aerodynamic forces and units are converted to metric.

Using the calculated forces, estimate G forces during the flight.

G forces are plotted over the flight. 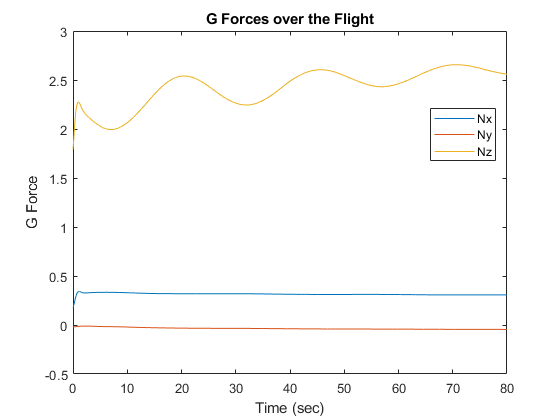 Simulation and Animation of a Linear and Nonlinear Pendulum Model