This codeshows how to perform glide calculations for a Cessna 172 following problem 9.1 in reference 1 using the Aerospace Toolbox software.

Best glide calculations provide values (velocity and glide angle) that minimize drag and maximize lift-drag ratio (also called the glide ratio). All the down described equations and steps are exists in the Matlab files, that you will download after the checkout.

The aircraft parameters are declared as follows.

Set the current aircraft conditions. The bank angle (phi) is zero for this case.

Convert altitude to meters using convlength. The atmospheric calculations in the next step require values in metric units. Then calculate atmospheric parameters based on altitude using atmoscoesa and convert density from metric to English units using convdensity.

Best glide velocity is calculated using the following equation. TAS (true airspeed in feet per second) is the velocity of the aircraft relative to the surrounding air mass.

Convert KTAS to KCAS using correctairspeed. KCAS (calibrated airspeed in knots) is the velocity corrected for instrument error and position error. This position error comes from inaccuracies in static pressure measurements at different points in the flight envelope.

This is the angle between the flight path and the ground that provides the highest L/D ratio. Convert glide angle from radians to degrees using convang.

Here are the best glide values:

These plots show drag and lift-drag ratio plots for the aircraft as a function of KCAS. The plots are used to verify the best glide calculations.

Set range of airspeeds and convert to KCAS using convvel and correctairspeed:

from above, the angle of attack is about 7 degrees. Adding the flight path angle (i.e. best glide angle) from above shows the fuselage pitch (attitude angle theta) to be about 2 degrees.

As expected, the maximum L/D occurs at approximately the best glide velocity calculated above. 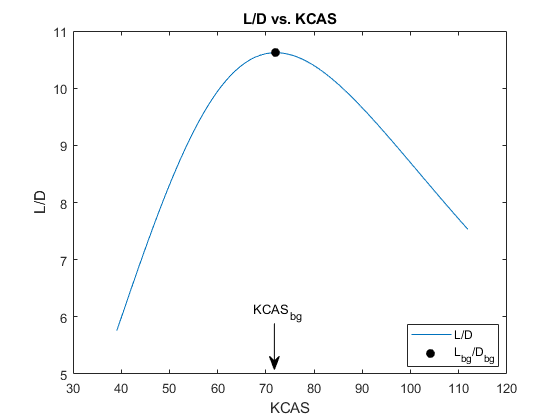 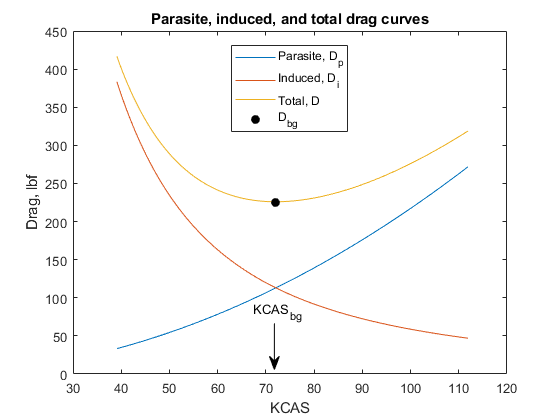